The annual Salers heifer sale took place in Gort Mart, Co. Galway on Saturday 17th October. There were close to one hundred and thirty commercial animals on offer on the day. Judge for the day was Mr. Séamus Nagle of Bullbank.

There was strong demand for well-grown maiden and in-calf heifers with quality lots fetching good prices. In-calf heifers averaged €1410 with a 70% clearance rate. Top priced heifer in the in-calf section was lot 167, owned by Mr. Billy Small, Mullingar. This first prize winner weighed 635kg and made €1850.  Billy also had the next two highest priced heifers in this section with lot 172 also fetching €1850 and his second prize winning lot 169 making €1760.

Maiden commercial heifers averaged €1100 and sold to a high of €1480. Bidders again agreed with the judge’s selections. First prize went to lot 134, a Bonaparte sired heifer owned by Mr. Martin Lydon, Ballinasloe. She weighed 440kg and made the top price of €1480. The second prize winner was lot 104, owned by Mr. Micheal Giles, Claregalway. She weighed 520kg and made the next highest price of €1380. In all, there were thirty nine maiden heifers on offer and a 100% clearance was achieved in this section.

Weanlings averaged €900 with a top price of €1230 for a well-grown 395kg heifer owned by Mr. Pat Cronin, Co. Cork. First prize in the weanling section went to lot 14 owned by Mr. Joe O’Gorman, Cappamore. This heifer was sold as part of a pair which averaged 345kg and fetched €1020. The second prize winner was lot 13, also owned by Mr. O’Gorman and sold as part of a pair. They averaged 330kg and were sold for €920. There were sixty one animals offered for sale in the weanling section and a 75% clearance was achieved. As has been the case in the past, strong weanling heifers born in early spring showing good growth rate and weight for age were in demand. Younger and lighter heifers were not as sought after.

There was a small entry of pedigree heifers with one weanling heifer and three maidens. The weanling heifer, Glenmore Uber was owned by Mr. Tom Mulcahy, Co. Limerick. This September 2019 born heifer was sired by Lataster Eric and she fetched €1320. In the maiden heifer section first prize also went to Tom Mulcahy for his October 2018 born Glenmore Tiffany. This heifer was well grown and showed real potential. Sired by Ulsan, she made €1700. Second prize went to Ballyconneely Ulrika owned by Mr. Seán Sweeney, Co. Galway. This sweet July 2019 born heifer was sired by Variegeois. She also made €1700. 3rd prize in the maiden section went to Glenmore Uriel, a January 2019 born heifer sired by Garou. She sold for €1200.

Many repeat buyers purchased their replacement heifers at Saturday’s sale and expressed their confidence in the Salers female to calve unassisted, go back in calf easily and rear a good calf. The plan for most seems to be to go to a Salers bull in years one and two before crossing to a charolais bull thereafter in order to produce the much sought after golden charolais x salers weanling. 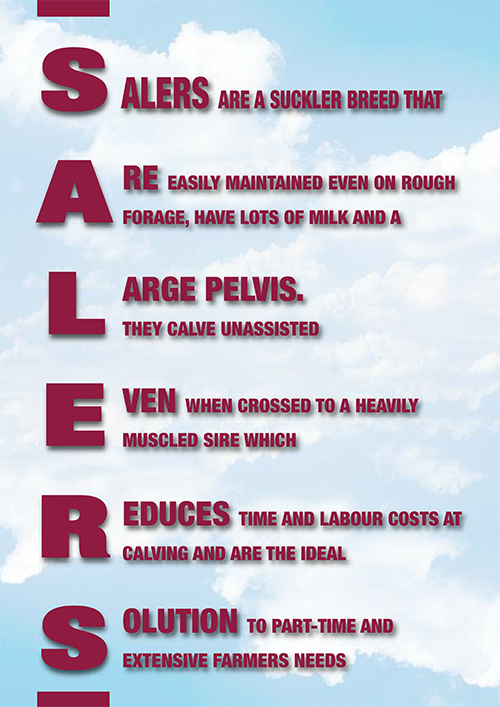